The project is an Australian PPP contract to design, build, finance, operate and maintain a light rail network between Broadbeach and Helensvale, providing a public transportation system for the City of Gold Coast and linking with the heavy rail network that provides direct access to Brisbane. The Gold Coast G: Link light rail system has become a resounding success in terms of passenger numbers and changing the way that people move around the city. 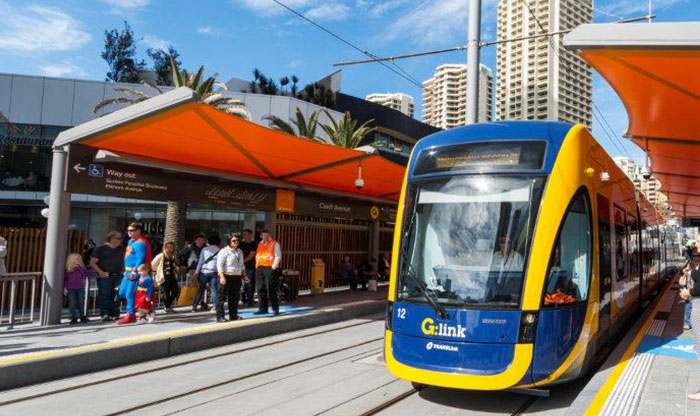 Gold Coast Light Rail is an integrated light rail system situated in Queensland’s Gold Coast. One of the many benefits of the rail system is the reduction of cars on the road. In some areas, this has been shown to be up to 44%, resulting in cleaner, healthier streets.

The project has been delivered in two stages: Stage 1, completed in 2014,  involved the design and construction of 13km of light rail track, 16 stations, and a number of viaduct and bridge structures, and the provision and operation of 14 x 45-metre light rail vehicles (LRVs).

Stage 2, completed in December 2017, provides for a 7.3 km extension to the network with an additional 3 stations, 2 of which have park and ride facilities, and 2 new bridge structures. An additional 4 LRVs were procured for Stage 2 of the project.

Stage 1 was constructed by McConnell Dowell and Stage 2 by CPB Contractors. Bombardier Transportation is responsible for design and supply of the LRVs and rail systems, and Keolis Downer Rail operates and maintains the system on behalf of the Operator Franchisee, GoldLinQ. The concession for both Stages expires in 2029.

The public sector client is a partnership among the Queensland Government, Gold Coast City Council and the Commonwealth of Australia.